Bomber Girls is a five-reel slot from the giant game developer Microgaming. The graphic style is inspired by 1940s pin-up girl posters and war propaganda, and four hot bomber girls can appear on the reels – alongside the bomb and the bomber plane, and various associated parafernalia such as the goggles and the compass.

This slot is developed by Microgaming

Bomber Girls can be played on both desktop computers and mobile devices.

This game has 5 reels.

This game has a wild symbol in the form of the logo for the Bomber Girls.

This game doesn’t have a progressive jackpot.

The fixed jackpot consists of 5,000 coins. To win it, you need 5 Bomber Girl logo symbols lined up on an active payline.

If three of the Bomber Girls logos (the wild symbol) appear, you will be offered to play the High-Low bonus game. In this game, four cards are dealt face down and one card face up. Your job is to correctly guess if the next card will be higher or lower than the face-up card. If you guess correctly, you will be rewarded. 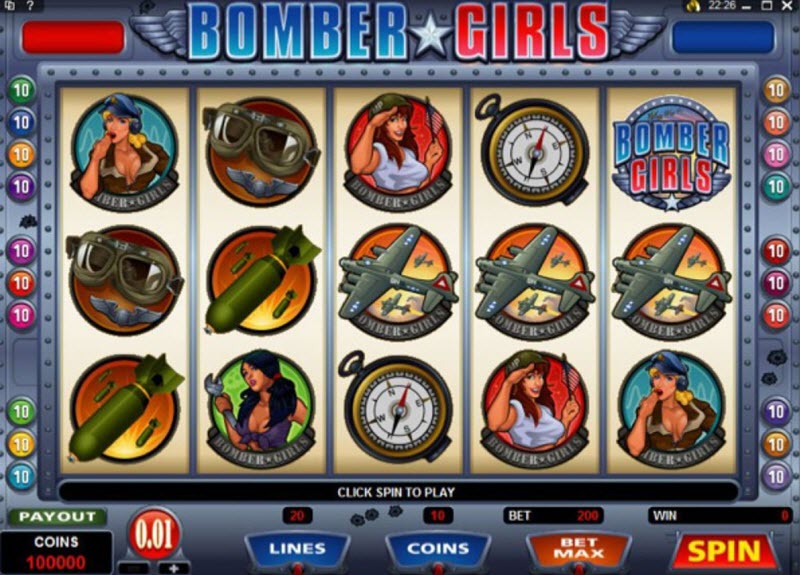 The compass is a scatter symbol. If you get at least three of them, on reels 2, 3 and 4, you will be rewarded with 14 free spins. During free spins, all wins are multiplied by 3.

The variance is low to medium.

The United States didn’t have any female bomber pilots in WWII, but some other countries did, including the Soviet Airforce which had female bombers from 1942 and onward. The Nazis called them “Die Nachthexen”, which means The Night Witches, since they often idled the airplane engine at some distance from the target and glided the rest of the way to the bomb release point. As only wind noise revealed their location, the German soldiers likened them to witches flying on broomsticks.

The real name of the Night Witches was initially the 588th Night Bomber Regiment, and later the 46th Taman Guards Night Bomber Aviation Regiment. This all-female regiment, formed by Major Marina Raskova and led by Major Yevdokiya Bershanskaya, was created by Stalin, and consisted chiefly of female volunteers in their late teens and early twenties. At its largest, the regiment had 40 two-person crews.

The Night Witches flew harassment bombing and precision bombing missions against the Nazis. In total, they dropped over 3,000 tons of bombs and 26,000 incendiary shells. Many pilots flew over 800 missions before the war was over. 32 of the members died in the war.

The planes they used were wood-airframed onces (wood-and-canvas Polikarpov U-2 biplanes) that had been designed back in 1928, intended for training and crop dusting. Each plane could only carry two bombs at a time, so each crew often flew eight or more missions per night. The planes were considered both obsolete and slow, but the Night Witches compensated by utilizing the plane’s exceptional maneuverability and the fact that they could fly slower than the stall speed of both the Messerschmitt Bf 109 and the Focke-Wulf Fw 190.

It would take until 1944 before the Night Witches got parachutes.