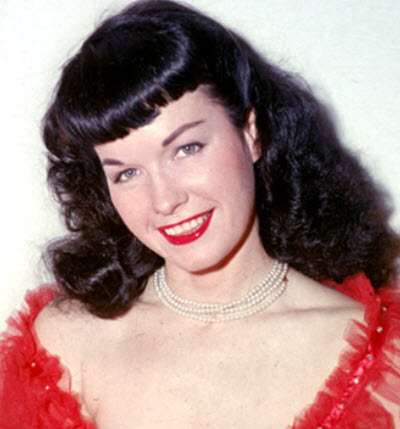 Page earned several monikers during her short but productive modelling career, including Queen of Pinups, Queen of Curves and The Dark Angel. In 1955, she won the title Miss Pinup Girl of the World. Her dinstinctive style – jet black hair with a fringe, bright red lips, seamed stockings, and snub-nosed six-inch stilletoes – has been homaged over and over again by later artists, such as Katy Perry, Dita von Teese and Madonna.

The highest-selling photograph of Page is a still taken by Irving Klaw during the filming session for Leopard Bikini Bound. It shows Page gagged and bound in a web of ropes.

Other examples of well-known pics of Page is the 1954 series taken of her at the wildlife park Africa USA in Boca Raton, including some nude pics where she is posing with two cheetahs, and photographs where she is wearing a leopard-patterned Jungle Girl outfit that she had made herself.

Bettie Page moved to New York City in 1949, hoping to find work there as an actress. After meeting the NYPD Officer and photographer Jerry Tibbs, she was introduced her to the world of ”camera clubs”. Officially, these clubs existed to promote artistic photography, but in reality, they were fronts for production of erotica / pornography.

Tibbs was the one who suggested the hairstyle with bangs, which would quickly turn into an integral part of Page’s “trademark” look. His reasons were practical rather than aesthetic; he wanted to reduce the risk of light reflecting off Page’s high forehead during photo sessions.

Page became a popular club model, and by 1951, images of her were published in men’s magazines such as Eyefull, Beauty Parade, Titter, and Wink.

In 1953, Page took acting classes at the Herbert Berghof Studio, which eventually landed her roles both Off-Broadway and in television. Off-Broadway, she appeared in productions such as ”Time is a Thief” and ”Sunday Costs Five Pesos”, while the TV audience could see her in ”The United States Steel Hour” and ”The Jackie Gleason Show”.

Page also acted and danced in the burlesque revue films ”Striporama”, ”Teaserama” and ”Varietease”, which just like her earier work was risque but without nudity or explicit sexual content. 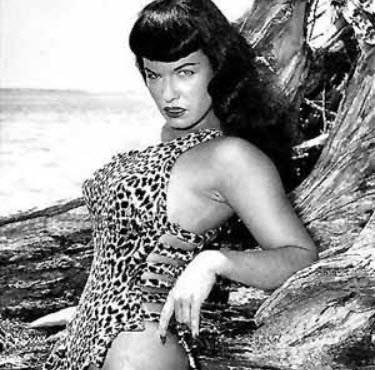 While vacationing in Miami, Florida in 1954, Page met Linnea ”Bunny” Yeager who signed her for a photo session at the wildlife park Africa USA in Boca Raton, Florida. The Jungle Bettie photographs taken during this session would go on to be some of Page’s most celebrated. In some of them, Page can be seen wearing a leopard patterned Jungle Girl outfit that she made herself, and she also made some of the lingerie featured in the photographs. Page also posed for nude shots in the park, including nude shots with a pair of cheetahs.

Bunny Yeager sent some photographs of Page to Hugh Hefner who selected one for the Playmate of the Month centerfold for the January 1955 issue of Playboy. Back then, the magazine was just two years old.

Despite it being January, the photograph is Christmas themed and shows Page kneeling before a Christmas tree holding an ornament and wearing only a Santa hat.

Half a century later, Hefner would describe Page as ” | … | a remarkable lady, an iconic figure in pop culture who influenced sexuality, taste in fashion, someone who had a tremendous impact on our society”. (Associated Press in 2008).

Page retired from modelling after 1957 and converted to born-again Christianity in 1959.